Lineup at the 1961 TCMG / ARR Conclave in San Simeon. (Click to enlarge)

The 5th annual conclave was held September 16-17, 1961.  Although officially held in San Simeon, the group stayed at McNally Motel in Cambria Pines. If you have any photos, stories or info to contribute, please send them to Steve Simmons.

Jim Crandall writes: “There are only 20 people in the photo and I’m sure there were more than 10 cars there. I took some pix at that event- my first Conclave-because I remember a shot of one of the ARR guys with a dog on his tonneau.”

Allan Chalmers writes: “The dog on tonneau was Lucien’s, who used to fly thru corners with aplomb.  Only fell off once.  In our blazingly fast ride from Carmel to Nepenthe, with Lucien and Linda, Joe & Jean Douglass in TCs and me in  my 55 Magnette, I took the dog!”

Who are these people?!? 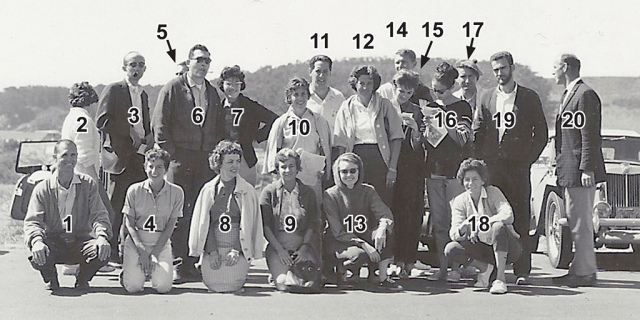 Others reported to be in attendance are: