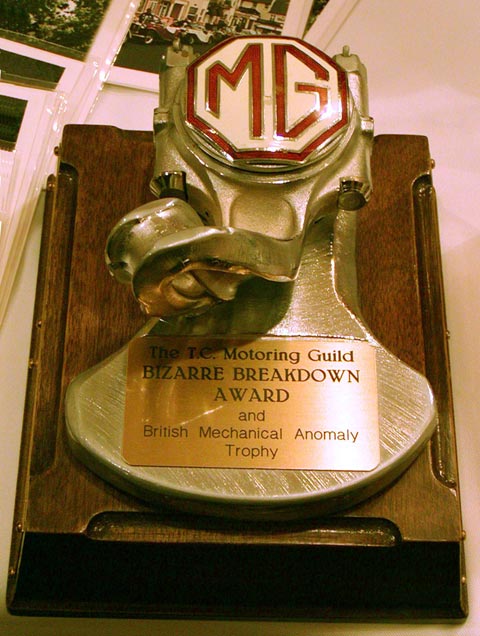 The Breakdown Award was the brainchild of the late (and infamous) Harvey Schnaer back in 2000. His inspiration for creating the award was a recent incident in which David and Joyce Edgar were rear-ended in their TC while on the way to our annual conclave in 1999.  The award was handed out for only a few years before falling out of sight.Surely the disappearance of the award could not be for lack of mechanical breakdowns!

In 2008, following the passing of Harvey, Don McLish revived the award and shortened the name from “The T.C. Motoring Guild Bizarre Breakdown Award and British Mechanical Anomaly Trophy” to simply “The Harvey”.  Because the old trophy was thought lost, a new award was fashioned from some old random items and a small leather bag.  The original trophy, constructed by Tony Henkels using failed TC engine parts donated by Mike Goodman, has now been unearthed and is once again in circulation.

Past recipients (not necessarily referred to as the “winners”)

2000: Dave & Joyce Edgar – Rear-ended while driving to our annual conclave.

2001: Dale & Joan Sheets – Broken crankshaft on the way home from our conclave.

2003: Jon Lutz – Broke an axle, had to walk 10 miles home to get a tow car and then towed the TC home. After arriving home in the dark he found the tail lights on the TC had quit working.

2009: Pete Thelander – Failed condenser on the way to GoF West.  Car was repaired on the road.

2012: Gene Olson – Overheated 35 miles from home on the way to GoF West.  TC was towed home, repaired and driven again to GoF West.  On the way home, the muffler fell off and was repaired with a coat hanger found on the side of the road.

2013: Allan Chalmers – Broken axle on the way to our annual conclave.  The axle was replaced on the side of the road, but on the way home from the event he suffered a flat tire on the same wheel.

2015: Pete & Fran Thelander – Continual stoppage returning from GoF West and also on the way to Conclave, resulting in tows home from both.  A partially clogged screen in the fuel tank was the cause.

2016: Pete & Fran Thelander – Broken rear spring perch caused the rear corner of the car to drop, requiring a tow home.  Followed up with failed fan belt during a later event, which was repaired on the spot.

2017: Kay & Larry Einhorn – Broken crankshaft on the way to a monthly meeting.  Car was towed home and a new engine sourced.

2018: Richard & Sandra Loe – Battery terminal fell off during an event. Then on another event, the rear spring perch broke, breaking the pinion gear, bending a half shaft, twisting the opposite spring perch and flat spotting a tire. On a later event, multiple brake leaks required them to take a different car for a long-distance tour, which itself sprung a last minute brake leak and due to fan belt issues had to be towed to the event instead of driven.

2019: Cliff Lemieux – On the way to a club meeting, Cliff’s newly restored TC began running badly and was towed home.  The problem turned out to be a blown head gasket due to a crack in the cylinder head.  Other teething issues are rumored to have occurred also, but were never confirmed.

2020: Cliff Lemieux – Cliff’s newly rebuilt engine seized up and damaged the crank.  In August the car was shipped to San Luis Obispo for major engine work. It was finally ready for conclave in October, so Cliff took a train up there, planning to participate at Conclave and then drive it home.  But the engine was leaking oil so badly that it had to return to the shop and he had to borrow a car to drive home to Oxnard. He drove up a second time and drove the TC home, only to find another major oil leak, so drove the car another 200 miles back to the shop for yet another engine pull.

2021: Cliff Lemieux – Continued issues with massive oil leaks forced Cliff to tow the car once again for repairs, this time 600 miles into a trip to GoF West in Oregon.  A failed condenser on another trip North further contributed to him being awarded the Breakdown Trophy.