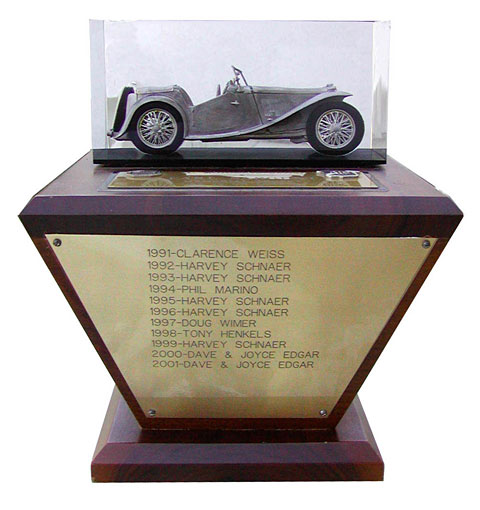 The Earl Sargent Memorial Trophy is awarded to the TCMG member who accumulates the most points for driving their TC to various club activities.  Points are accumulated each year starting the day after our Annual Holiday Party until the next year’s Holiday Party.  Points for the trophy are awarded to TCMG members in the following manner:

Ties are broken by total number of driving events and meetings attended with a TC. In the event there is still a tie, driving events shall weigh more heavily than meetings.  If the parties tied have each achieved 100% attendance at all official TCMG activities for the year, then all tie breaker rules are disregarded and a tie is announced.

For a complete explanation of rules regarding this trophy, CLICK HERE.  Or, to learn more about achieving a perfect attendance, see the Iron Bottom Award page.

(from 2012 on, click to view final standings for each year)

Closest competition*:
Steve & Linda Simmons and Richard & Sandra Loe in 2014 and 2020.  In both cases Simmons led with greater mileage but an  overall tie was awarded due to perfect attendance of both parties.

Highest accumulated score by a female driver*:
Kay Einhorn with 9 points in 2017.

Longest period of time with perfect attendance*:
Richard & Sandra Loe, from January 2014 through May 2018.  Using the same TC, the Loes attended 104 total club activities, or 99 calendar meetings and events.  Their streak was only broken when the car suffered a terminal breakdown on the way to the June 2018 event.

* Since the current points system became active in 2012


All content contained on this site is copyrighted unless otherwise noted.
No material contained herein may be copied or reproduced without express written permission from the site owner.
© 2021 TC Motoring Guild