General Tech Topics From Other Sources 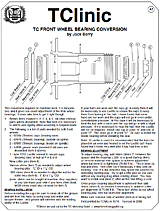 T-Clinics are technical bulletins that have been written or collected by TCMG members over the past several decades.  Often reprinted from old TCMG newsletters, they are designed to help you keep your TC healthy and on the road.

The list below is sorted by general subject, and each one is preceded by its clinic number.

NOTE: T-Clinics may be added, deleted or modified as necessary to keep up with current information and parts availability.


All content contained on this site is copyrighted unless otherwise noted.
No material contained herein may be copied or reproduced without express written permission from the site owner.
© 2023 TC Motoring Guild