On Sunday, October 27, 1968, members of TC Motoring Guild participated in the Times Grand Prix, parading 36 world-class drivers around the track at Riverside Raceway in California, USA.  The TCs were chosen as a special salute to the car and the people who played a major role in pioneering sports car racing in this country.  The majority of the TCs appear to have come from TC Motoring Guild, although some came from as far away as Denver.  Some reports state that as many as 46 TCs we there, which was a big number even in those days.

Allan Chalmers was there and wrote: “As Jim and others will recall, Each driver sat on the top of the seatback and the cars ran around the track. Someone asked Gert Jensen if he had gotten an autograph from his driver. Gert replied that he had, and pointed to the greasy hand prints on his tonneau cover where the guy was hanging on for dear life!”

He continues: “I had flown down and Gert drove from Berkeley. A great adventure. Dwane Carlson took us on a tour, which included a shop where a chap, don’t remember the name, had two K3s! I rode out to Riverside with Dick Miura in his TC. It was a hot, hot day and also a smog alert. We walked thru the pits and saw all those legendary drivers.”

The event program (shown below) included an article by Jim Crandall about the upcoming event.  The article also gives a brief history of the TC and tells the readers about TC Motoring Guild, what it took to organize the cars and the ongoing efforts to build the International MG TC Register.

David Edgar sent this image (click for larger version) showing those he has been able to identify.  If you can identify anyone in the photo, please contact us!

David Edgar also notes: Regarding footnote 1, Ilene Wimer and Nancy Wimer are sister-in-laws so probably it is Ilene. Note that Doug and Gayne (husbands are close by too). I am to believe she may be similar looking to Jim Johnson’s girl friend and photo is not that detailed so maybe he was just guessing. 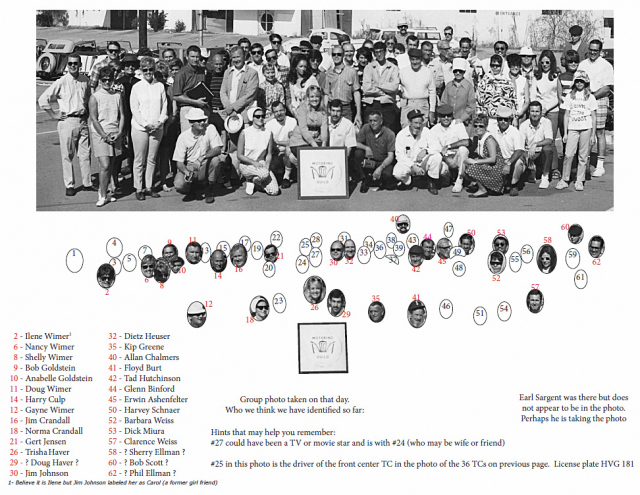 Below is an article printed in the LA Times about the upcoming race. There are a few items worth noting including the author’s idea of vehicle upkeep being “waxing and polishing chrome”. The dates of manufacture are also wrong, stating the TC started production in 1947 when it was in fact 1945. The claim that only 100 cars remained in the USA is also grossly incorrect, as more TCs from the 10,000 produced came here than the rest of the world combined, and at the time of this writing (2019), in our club alone there are 100 cars. In 1968 there were likely still thousands of them in the country.

All content contained on this site is copyrighted unless otherwise noted.
No material contained herein may be copied or reproduced without express written permission from the site owner.
© 2021 TC Motoring Guild